There could be a major ecological impact to the coastal waters stretching from British Columbia to Oregon after an Atlantic salmon farm near the San Juan Islands, just east of Victoria, accidentally spilled thousands of live fish into local waters. 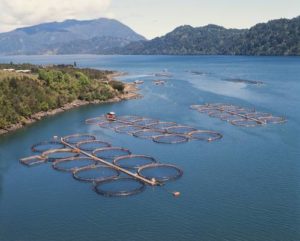 The incident occurred on Saturday afternoon at a facility owned and operated by Canadian-based Cooke Aquaculture. According to reports, up to 305,000 adult Atlantic salmon – each weighing 10 lbs – may have escaped from the pens in the ocean water.

Atlantic salmon are an invasive species in the Pacific Northwest, and could threaten local species, particularly salmon native to BC, by predating on native juvenile fish, transferring diseases, breeding with native species, and competing for the same food sources.

In my opinion all fish farms should be kept on land to avoid passing on disease and situations like this that threatens our fisheries.